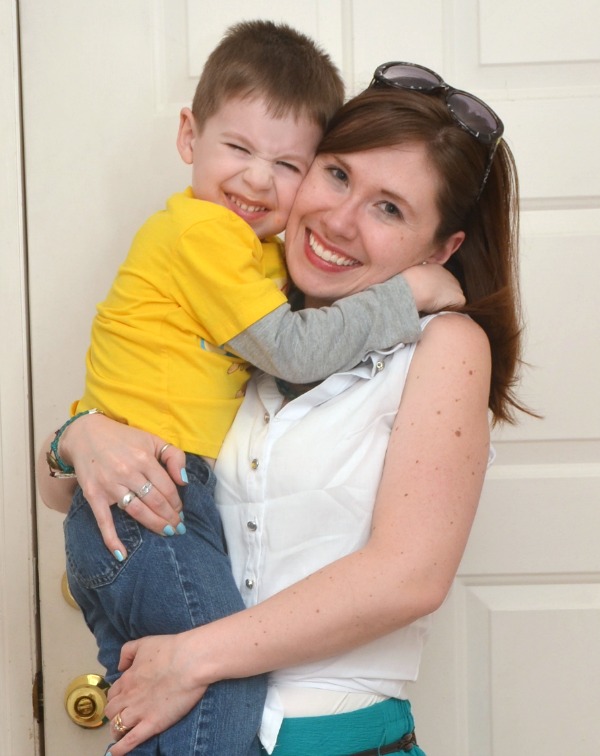 One Artsy Mama celebrates Christmas in July by raising money for charity. Get to know Amy, her beneficiary and her answers to our questions about the virtues of generosity and compassion with this post from the Balsam Hill blog.

Starting with a love of art and all things creative, One Artsy Mama began as a small corner of the Internet where Amy Latta blogged about her craft projects. This small corner soon blossomed into a place where like-minded individuals discovered inspiration and shared their creations. Amy uses her blog to share tips and tricks on a variety of projects, including home decor, fashion, kids’ crafts, sewing, jewelry, crochet and more.

Amy started blogging when her son was just two years old, in an effort to find a creative outlet for him. In a few years, she started to mold One Artsy Mama into what she wanted it to be. Inspired by the game Honestly, Amy divided the content of her blog into a number of core categories: Honestly Doable, Honestly Relatable, Honestly Wearable, Honestly Edible, Honestly Teachable, and Honestly Accountable. The projects she showcases in her blog are not perfect—and rightly so. She aims to show through her and her son’s creations that there is no perfect project, that mistakes should not deter creativity.

Sharing is Amy’s passion and she shares the lessons she learned from blogging through a blogger mentoring program she started in January 2013. This program provides weekly readings, assignments, and one-on-one mentoring for up to 20 bloggers at a time.

Amy’s heartstrings were tugged by Mallory, the young teen who decided to help Africa for Christmas of 2011. In response, Amy decided to support Project Yesu for Balsam Hill’s Christmas in July Charity Campaign. Project Yesu, which takes inspiration from the Hebrew word for “Yahweh the Savior,” and it has indeed become a savior for a number of African children who are now able to go to school and afford some basic necessities. Supporters of the project are constantly on the lookout for areas of need in Uganda, new partnerships to make, and ways to help. In joining hands with Mallory and Project Yesu, Amy aims to make Mahatma Gandhi’s words a reality: “Be the change you want to see in the world.”
—
BH: Could you tell us a bit about the cause you’re supporting and what it means to you?

Amy: Project Yesu is an organization started by a young girl named Mallory when she was just 12 years old.  When her parents asked for her Christmas list, she began to reflect on the abundance of things and the vast amount of possessions she had compared to children around the world who didn’t even have enough to eat or clean water to drink.  Mallory became passionate about helping other children, especially those in Uganda, by providing supplies for them in a very personal way.  She and her team have traveled to Uganda several times to deliver food, medical supplies, pillowcase dresses and more.  I became involved with Project Yesu several years ago when Mallory’s mother sent me a message asking if I could make her daughter a special necklace with the name of the organization on it.  I was incredibly moved when I heard her story and couldn’t wait to help.  Since then, I’ve been able to help spread the word about Project Yesu, especially the annual pillowcase dress drives, to my readers.

BH: Deciding on a charity to support can be difficult. What led you to choose the charity you’re helping for this campaign?

Amy: There are so many wonderful organizations to choose from; I don’t think it’s possible to choose a wrong charity to support.  I decided on Project Yesu because it’s something I’ve been able to help publicize for the past several years. It’s meant a lot to me personally to follow along with Mallory’s team’s journey and see photos of girls in Uganda wearing dresses I made in my own home.  As a teenager, Mallory can use all the help she can get spreading the word about what she’s doing, and I love the fact that I can use the social platforms and audience I’ve cultivated to support such an important cause.

BH: Charity and giving are two things that are often associated with the holiday season, but can be easy to forget in our day-to-day lives. Do you have any tips for how people can incorporate the spirit of giving more into their everyday lives?

Amy: I think it starts with an increased awareness of the needs around us.   I, for one, am guilty of taking the material things for granted I complain about things that are definitely considered as “first world problems.” Sometimes, just catching myself in the middle of a complaint and realizing how small it is compared to the fact that there are thousands of people around the world without clean water, food, and medicine, reminds me to be grateful for what I have as well as being generous with it too.

BH: Could you share a story about a time someone did something kind for you that really touched you?

Amy: Right after my son was born, a number of families in our church provided meals for us every day for several weeks.  It was such a help not to have to cook as I was recovering from a c-section and as we were adjusting to life with a newborn.  They even went out of their way to make sure they cooked meals that my husband, who is lactose intolerant, was able to eat and that we both liked.  It was something that helped us in a very practical way during a transitional and stressful time in our lives.

BH: Could you share a story about a time you did something for a friend or family member and how they reacted?

Amy: Last fall, my best friend had her third child and was feeling overwhelmed caring for three boys ages three and under.  A lot of people offered her help the first few weeks, but afterward, she felt very much on her own.  When she least expected it, I created a “New Mom Pampering Basket” for her that included lotion, makeup, bath and body products, magazines, tea, a personalized cup, and some of her favorite snacks…all things that were needed to help her remember that she should take care of herself and not just the kids!  She was completely surprised, and it was so fun to see her unpack all the goodies and just feel pampered.

BH: How do you encourage your kids to be giving?

Amy: In addition to having a regular piggy bank, my son also uses a special “Giving to Others” bank.  When he puts money into his bank, he also has the option of putting some into the bank for other people.   When he’s collected a significant amount, we give him choices for how he can use it generously, like donating it to an organization, or buying a physical item for someone in need.  We also have a “toy in, toy out” policy so that when he gets new things, he is encouraged to choose an older toy that may not be age appropriate anymore and donate it to a younger friend or the local Goodwill.

BH: Is there a time when your children acted generously in a way that surprised and delighted you?

Amy: Once, we were having a playdate with my friend Jess, her daughter Rose, and her son Isaac.  Isaac is three years younger than my son, and he was entertaining himself the whole time by playing with a blue race car that belonged to my son.  When they were getting ready to leave, my son told Isaac he could keep it since he was enjoying it so much.  As an only child, my son doesn’t often have to do a ton of sharing, let alone giving his things away, so the fact that he did it on his own without any prompting was really special.

BH: What do you think is a simple way people can give back to their communities?

Amy: Every community has local organizations where you can donate gently used items to be given to those in need or sold at very affordable prices.  Another great idea is to contact local schools and ask if there are families who could use groceries, clothing, etc. Then, you can also provide those things anonymously at times of the year other than Christmas or Back to School.

BH: Anything else you would like us to know about you and/or the charity you selected?

Amy: Mallory and her team are actually in Uganda at this very moment, providing food and clothing for the children as well as offering them hope.  To see photos of what they’re doing and follow along with their trip, check out Project Yesu on Facebook or visit Project Yesu.

If you would like to donate to Project Yesu, please visit Balsam Hill’s Christmas Charity page.