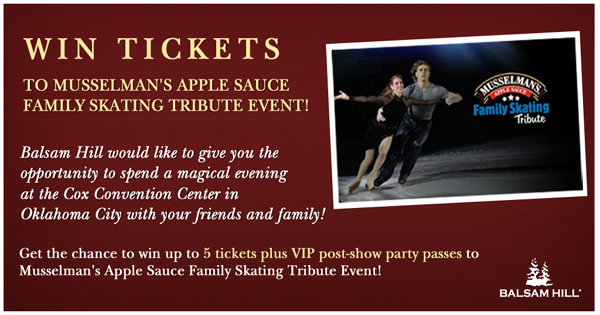 Celebrate the holidays early with your loved ones by treating them to the excitement and spectacle of Musselman’s Apple Sauce Family Skating Tribute, presented by Balsam Hill. Hosted by figure skating stars Kristi Yamaguchi and Michael Weiss, this family-themed show showcases an impressive line-up of skating champions along with special guest artist Kristian Bush of Grammy Award-winning country duo Sugarland.

This entertainment extravaganza is set for 2:00 pm on October 18, Sunday at the Cox Convention Center in Oklahoma City. Join our sweepstakes and get the chance to win tickets to this grand show.

This sweepstakes is open to all residents of the United States, 18 years old and above. No purchase is required to participate. To join, simply visit our Facebook page, click on the contest app, and provide your complete name and valid e-mail address. Earn up to 17 entries by accomplishing the following:

Six winners will be announced on October 5, with each winning the number of tickets they specified in their entry form (maximum of 5 tickets per winner).

For more details about this contest, visit our official Facebook page.