European Dishes Part 2: Cuisine in the Caucasus and Central Europe

Continuing our series on Christmas meal traditions celebrated by families from all over the world, we’re focusing on more regions in Europe: the Caucasus and Central Europe. Traditions like fasting and folk beliefs around food items are prevalent, as well as recipes to get your taste buds traveling. 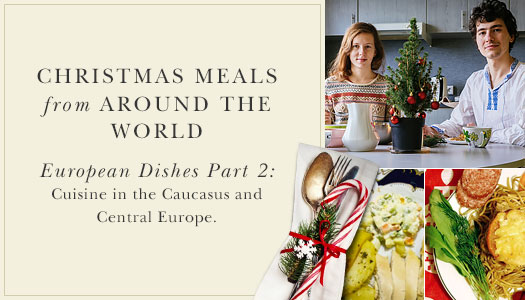 Yuletide in the Caucasus is centered around religion and church activity, and fasting or eating non-meat dishes is commonly practiced in the days leading up to Christmas Day. In Armenia, the Christmas Eve meal usually includes nevik (a dish of green chard and chick peas). Tanabur, a traditional yogurt or wheat soup, is also a regular part of an Armenian Christmas menu. Towards the end of the fast, dried fruits and nuts and jellied desserts are consumed to prepare the palette and stomach for the Christmas feast. Russians also fast daily before Christmas, not eating until the first star appears in the evening sky. Kutia, rice or wheat porridge served with honey, is a popular dish with deep cultural significance. To symbolize unity, families eat the porridge from a common bowl; a spoonful of sticky kutia is thrown up to the ceiling, and if it sticks, it signifies luck or a good harvest.

On Christmas Eve, food in the Caucasus is festive: Armenian Christmas dishes include pudding, glazed ham, dried fruit and candy, which are always prepared for guests. In Russia, borscht (beetroot or cabbage soup), sauerkraut, buckwheat porridge, and various sorts of salads make up 12 dishes, which represent the 12 Disciples of Christ.

Cinnamon and almond for garnish

Cooking instructions: Wash the wheat, then soak overnight it in a covered bowl. Remove the wheat, and boil it in 6 cups of water in a large pot, adding more water and stirring periodically until the wheat becomes tender.

Add the apricots, pine nuts, raisins and sugar and simmer for 30 minutes, stirring continuously. If the mixture becomes dry, add more water. Stir in the rose water and set the pudding aside to cool. Once it cools down, refrigerate until well chilled. When you’re ready to serve, add the almonds and cinnamon on top of the pudding.

Cooking instructions: Boil the beef shank in water for 1½ hours, then strain the resulting broth through a cheesecloth. Carve and separate the meat from the bone; set aside.

Peel and cut the beet root into two–inch strips, then place it into the broth and stew for 30 minutes. Peel and cube the potatoes and add to the broth; once the mixture boils, add the bay leaf.

After a few minutes, remove from heat and leave uncovered to set before serving.

Central Europe is a melting pot of cultures and cuisines. As with the Caucasus countries, Christmas is centered around religious tradition. In the advent days leading to Christmas, Croatians celebrate with feasts for Saints Barbara, Catherine, Nicholas, and Lucia. Polish children have jaselka (Nativity plays) and roraty (masses) held at dawn are dedicated to Mary, who receives the good news from the angel Gabriel. Many traditions around food are practiced in Central Europe. A Croatian man gives his girlfriend a decorated apple on Christmas, while in Poland, the smell of tangerines in school or the workplace marks the beginning of Christmas. In Slovakia, it is believed that if you can fast until Christmas Eve, you will be able to see a little golden pig after midnight mass. Romanian children who sing carols well are rewarded with money or cozonaci, a traditional cake. A vase with a sheaf of wheat, called the didukh or ‘grandfather spirit’, is placed in the midst of a Christmas Eve feast to represent the family ancestors and their memories.

Salt, pepper, and parsley (to taste)

Cooking instructions: Cube the onions and the bacon then sauté, adding chopped garlic towards the end. Add this mixture to the minced meat along with chopped parsley, rice, salt, and pepper.

Remove the cabbage leaves and make them into evenly thin parts by trimming off the thicker sections. Place the meat mixture you made earlier into the cabbage leaf; fold one side over the stuffing, roll, and then tuck the end into the opposite side. Layer the bottom of a pot with sliced cabbage and place your uncooked sarma on top of it, lining them up in a circle formation. In the center of the pot, add the ribs, chopped onions, and more cabbage. Pour water into the pot until the sarma is submerged, and cook for 2 hours, occasionally shaking the pot. Serve hot.

Cooking Instructions: In a medium-sized bowl, sift the flour. Combine the beaten eggs, water, sour cream and melted butter and mix it with the flour to create a dough. Knead until soft and smooth, and set aside, covering it with a warm cloth.

Melt the butter in a skillet or pan and fry the onions until they are soft and translucent. Add in the chopped mushrooms and sauté until the liquid evaporates, stirring constantly. Once done, set aside to cool.

Prepare a clean surface with a dusting of flour. Roll out the dough to 1/8 inch, then cut it into 2-inch squares. Place some of the mushroom mixture into the center of the squares and seal the edges with water.

Cook the raw uszca in salted, boiling water until they surface. Drain and pour melted butter over the dumplings. You may also fry it in butter until brown on each side

Black and red pepper (to taste)

Cooking Instructions: In a large pot, place the sauerkraut into 4 cups of water and bring to a boil. Add the garlic into the mix, then add in the clove, nutmeg, caraway, bay leaf, black pepper, onion and dried mushrooms. Cut the pork into small, bite-sized pieces and add it into the pot. If the soup starts to dry and thicken, add more water. Cook for 20 minutes, then add in the sausage, cut into small cubes. Season with red pepper and paprika then cover the pot. Simmer for 30 minutes. Serve with sour cream, if preferred.

In a heavy-bottomed pot, heat the olive oil and sauté carrots, celery, and onions until the onions are translucent. Spoon in the tomato paste and add chicken broth and water. Add salt and pepper to taste. When the mixture boils, add the meatballs.

Keep the boil going until the meatballs are thoroughly cooked through, which will surface when done. Drop in the bullion and lemon juice. Pour in the egg and stir counter-clockwise for a minute. Add salt and pepper to taste and serve garnished with parsley and sour cream on the side.

Cooking instructions: Mix the fruit into a large pot and fill it with cider, stopping only until it is submerged. Add cloves and the lemon peel. Put the pot on the stove; simmer until the large fruit are cooked but not falling apart. Drain the liquid, and cook as a reduction until it is a third of its original mass. Add cinnamon, fruit, honey and lemon juice. Reheat, and add more lemon juice to taste. Serve warm. Compote keeps in the fridge for up to 2 weeks.

We hope this series on Christmas meals around the world gets you stepping into the kitchen to try out the wonderful recipes we’ve put together from the Central Europe and the Caucasus. Join us on another journey on the third part of our articles on European holiday cuisine: European Dishes Part 3: Mouthwatering Medleys of the Mediterranean and Nordic Regions.

3 Kitchen Decor Ideas to Bring a Touch of Autumn