Continuing our journey in learning about holiday traditions and discovering various Christmas offerings across countries, this time we travel to both the largest and smallest continents in the world. Home to diverse cultures and history, the continents of Africa, Asia, and Australia offer some of the planet’s best in both festivities and food. 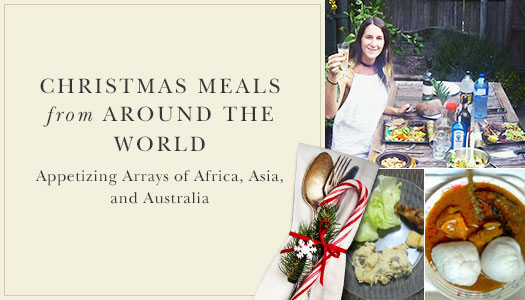 In Ghana, Christmas season begins on December 1st, usually coinciding with the cocoa harvest, while the Coptic Christians in Ethiopia and Egypt follow the Julian calendar and celebrate Christmas on January 7th. Centered on family and community gatherings, Christmas celebrations in Africa feature nativity plays, carols, and processions or parades. Common Christmas meals include various types of stews, rice, and jams. Another staple in Central and West Africa is the fufu, a ball of dough made from boiled plantain and cassava.

Cooking instructions: Put cassava and plantains (with peels on) in a large pot, fill with enough water to cover, and bring to a boil. Cook for 30 minutes or until cassava is soft, and then drain. Remove peels from plantains and mash with butter. Use an electric mixer to mix until smooth and use more butter, if needed, for the mixture to blend.

Christmas in India is a small, intimate celebration centering on family and midnight mass. Instead of the traditional Christmas tree, people decorate banana or mango trees. Weeks before Christmas, women get together to prepare Christmas sweets called kuswar, which include fruitcakes, rose cookies, and sweet dumplings. These goodies are then given to neighbors and family members on Christmas Day. Indonesians also attend a midnight service, and have a special type of Christmas tree made of chicken feathers. In the province of Papua, the locals have a ritual called Barapen, where meat is prepared and cooked using hot stones. The food is then shared by the community, symbolizing their unity, gratitude, and caring. In the predominantly Catholic Philippines, people attend early morning mass known as the Misa de Gallo (Rooster’s Mass) for 9 days, culminating in the midnight mass on December 24th. Filipino families then gather at the nochebuena, a Christmas dinner celebration that includes traditional fare of lechon (roasted pig), pineapple glazed ham, fruit or macaroni salad, and rice cakes.

For the Pineapple Glaze:

Cooking Instructions: Combine pineapple juice, beer, soda, sugar, and salt in a pot and stir until dissolved. Add ham and about 6 to 8 of the cloves, making sure ham is fully submerged in the liquid and bring to a boil. Lower heat and continue to cook for about 1 hour. Allow to slightly cool and refrigerate overnight.

Drain ham, and keep about 2 cups of the poaching liquid. Allow meat to stand for about 1 hour or until it reaches room temperature. With a knife, score the surface fat in a diamond pattern at about ¼-inch deep and 1-inch apart. Place cloves at the intersection points of the cuts to form a nice pattern around the top and sides of ham.

With a pastry brush, brush the pineapple glaze (directions below) on the ham. Bake ham in a 325°F oven for 1 to 1½ hours or until internal temperature reaches 140° F. Continue to baste ham every 15 to 20 minutes with the remaining glaze while baking. For the last 5 minutes of cooking, increase temperature to 400°F and bake until nicely browned.

Remove from oven and brush liberally with the liquid from the pan. Cover with foil and let rest for about 10 to 15 minutes before slicing.

For the Pineapple Glaze: In a sauce pan over medium heat, mix reserved poaching liquid, sugar, mustard, and crushed pineapples. Stir until sugar is dissolved. Stir occasionally, until liquid is reduced and thickened.

In the land down under, Christmas arrives during the summer months. Australians have a popular event called Carols by Candlelight where people head outdoors, light candles, and sing Christmas carols. They also decorate the Christmas bush, a tall shrub with red flowers that is native to Australia and New Guinea. As for Christmas in New Zealand, families can be found either camping or at the beach because of the warm weather. Even Santa Claus is known to appear in his summer outfit to greet the children at the beach and join the festivities.

Beef brisket on the bone (4½ pounds)

Cooking instructions: Preheat the oven to 215°F. Place the brisket in a roasting tray and smother with the mustard and Worcestershire sauce. Add salt and pepper to taste. Roast for 10-12 hours or until the meat is falling off the bone. Make sure to turn the meat or tent with foil to prevent from drying out.

We hope you have enjoyed this around-the-world tour of delectable Christmas dishes. These amazing food finds are sure to make your Christmas dinner table interesting and unique, and one that your family and loved ones will surely enjoy.

What do you want to do next?

Create moments you’ll cherish with our most realistic Christmas trees and premium home décor. Share your special memories with us on Instagram using #InspiredByBalsamHill

Let us help you bring to life that Christmas wonde

Spook up your porch, yard, and patio with these Ha

It's that time of the year again when folks who lo

What better way to make Christmas more fun than to

The eerie orange glow of these silhouettes makes t

Apart from the front door, your windows are prime

One of our favorite ways to spread cheer during th

When shopping online, be careful and watch for dea

#WeeklyDoseOfJoy: This is your sign to put your tr

Find the Christmas tree that suits your style by c