The past decade has been a meaningful journey for us at Balsam Hill and this year is extra special as we celebrate our 10th anniversary. We have a lot of exciting things lined up and one of them will be our grandest celebration to date. As part of the festivities, Balsam Hill is joining the most iconic event in New York City—Macy’s annual Thanksgiving Day Parade!

Macy’s only selects a few new floats to debut in the parade and we’re proud to be counted among them this year. Balsam Hill’s “Deck the Halls” float is a winter wonderland designed to delight the 3.5 million spectators who flock to the event. This year also marks the parade’s 90th anniversary, making our partnership even more memorable.

Standing over 30 feet tall, the float is an impressive version of the classic wooden pyramid, with each of the three levels hand-carved and hand-painted by the Macy’s Parade Studio team. At its heart resides an eye-catching centerpiece: a beautiful functioning carousel. Watch a sneak peek of the Deck the Halls float in the making and stay tuned for weekly reveal videos of the float as it comes to life.

Balsam Hill has always been about tradition and craftsmanship, and the Macy’s team has perfectly captured those values in building our float. We couldn’t be happier with the final float design and can’t wait for you to witness its grand debut.

And because Thanksgiving is all about gratitude and giving back, we would like to share this milestone with you! Enter our giveaway for a chance to win a trip to New York City for four, plus Grandstand seat tickets to the parade. Click the image below to view more details on our official giveaway page. 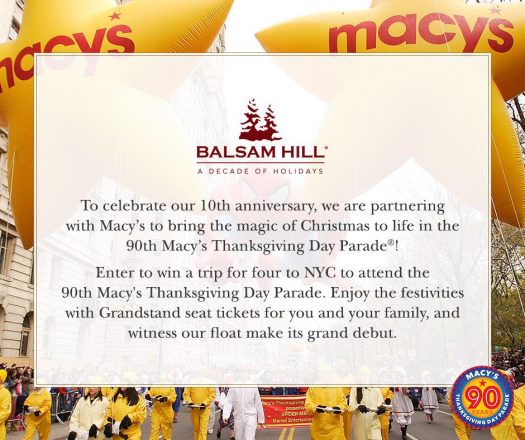 The 90th Anniversary Macy’s Thanksgiving Day Parade airs nationwide on NBC-TV, on Thursday, Nov. 24, 2016 from 9 a.m. – 12 p.m., in all time zones. From all of us at Balsam Hill, thank you for coming along with us on our journey to 10 wonderful years of holiday cheer!