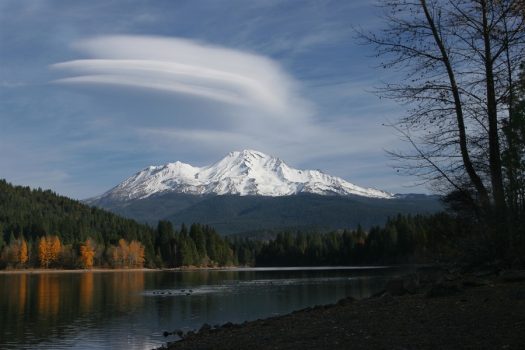 Mt. Shasta is simply awe inspiring. Standing at 14,163 feet, it is the largest Cascade Range volcano by volume. It is a beautiful mountain and one that, in my opinion, deserves to have a gorgeous Balsam Hill Christmas tree named after it.

For years, we’ve received feedback from our customers saying they absolutely love our BH Noble Fir for its beautiful shape and sturdy upward sloping needles. However, some of them also wished the foliage were a color other than the classic silver-green of the Noble Fir. This prompted me to look into other possible foliage colors for this popular Christmas tree.

In my research of Christmas tree lots on the Pacific Coast, I found that most of the Noble Firs sold in the region had the same classic silver-green color, but that a few of them would have greener foliage.

Armed with the knowledge that there were, in fact, green Noble Firs out there in the world, I figured that the color most likely had to do with some natural factor such as the elevation of the tree farm or the soil composition of a particular tree farm. After talking with a professor who studies these species, I learned that the most likely reason for the color variation has to do with the genetic composition of the seeds used by tree farmers. In general, cultivated Christmas trees have far denser foliage than that of wild growing trees. The density and foliage color of the trees are what Christmas tree nurseries look for in choosing which trees can be cultivated on the farm.

On top of all this, I also discovered that there are two highly related tree species to the Noble Fir (Abies procera): the California red fir (Abies magnifica var. magnifica) and the Shasta Fir (Abies magnifica var. shastensis). It turns out that there is an ongoing debate in the scientific community over these three related tree species. The chloroplast DNA research on the trees suggests that the Shasta Fir is a hybridization of the Noble Fir and the California Red Fir.

Given that the scientists are still trying to settle the debate on the origins and lineage of these three trees, we at Balsam Hill have decided that at the very least we should offer two versions of this beautiful tree similar to the farm-grown versions available on many tree lots. Chloroplast DNA aside, our Shasta Fir Christmas tree is quite simply a less silver and more green version of its wildly popular sister, the BH Noble Fir.

Whether you prefer the traditional silver-green color of our BH Noble Fir, or the “normal” green color of our Shasta Fir, I’m sure you’ll love your Christmas tree. It is absolutely gorgeous and always a show-stopper when someone sees it in person for the first time.

If you can’t decide between them, and you care about convenience, I’d also encourage you to consider our BH Noble Fir Flip Tree™, a brand new addition to our lineup. This tree marries the beauty of the silver-green BH Noble Fir with our innovative Flip Tree technology. In fact, Bruce Schooley, the inventor of the Flip Tree, recently told me that his all-time favorite Flip Tree is the BH Noble Fir Flip Tree! Check out this interview.

The Balsam Hill Fraser Fir: Realism Unlike Any Other