Amazing Christmas Trees from Around the World

The world is home to marvelous Christmas trees on public display. With all their unique holiday ornaments, these trees set the ideal atmosphere for a festive celebration. Here is our selection of the most magnificent Christmas trees from different places in the world, giving light and inspiration to all in this beautiful season of giving.

Every year, New York is made brighter by a large elegant tree. The Rockefeller Center Christmas Tree is often a 69-foot to 100-foot Norway Spruce, and is lit in front of a live audience through the Christmas in Rockefeller Center show. This lighting tradition officially began when the 30 Rockefeller Plaza was inaugurated in 1933. However, the tradition started unofficially during the Depression, when the construction workers of the building decorated a 20-foot Balsam Fir on the Christmas Eve of 1931. 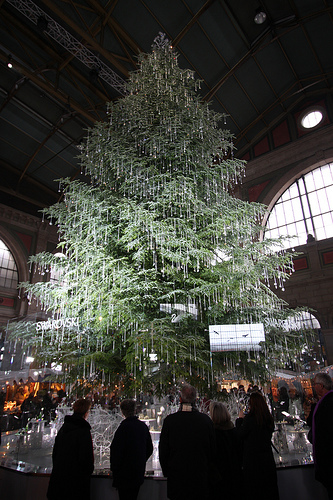 The breathtaking Swarovski Christmas Tree at the Hauptbahnhof train station is a source of wonder and sparkle in Zürich’s covered Christmas market. Embellished with more than 5,000 Swarovski crystals in pink, blue, silver, and white draping each branch, the tree is made more brilliant with a spotlight cast on it from above. 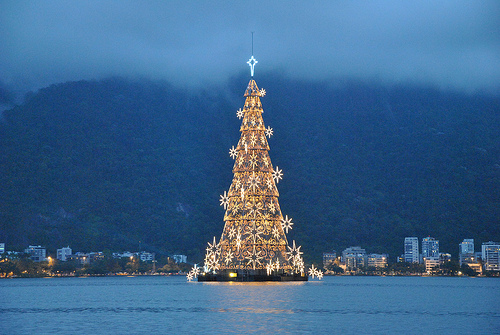 The Floating Christmas Tree in Rio De Janeiro is an awe-inspiring vision. Focusing on the four seasons, the 28-story tree is decorated with snowflakes, flowers, gold ribbons, and autumn leaves, representing winter, spring, summer, and fall. Aside from incorporating these elements, the 542-ton tree also showcases a light display that tells the story of the changing seasons. Known as the world’s tallest floating Christmas tree, it ushers in the holiday season in this vibrant Brazilian city. 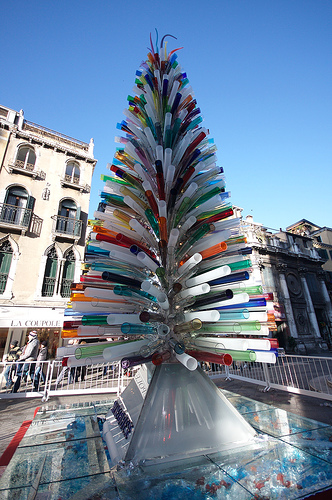 Venice is famous for glassmaking, a trade which originated in the Venetian island of Murano in the 8th century. The Murano glassmakers, who are well known for their craftsmanship, created the unique Murano glass, which inspired this landmark Christmas tree. Built with glass tubes in a variety of colors, the tree looks stunning especially when lit at night. An exciting spectacle during the holidays, the lovely Murano Glass Tree is a symbol of Venetian artistry. 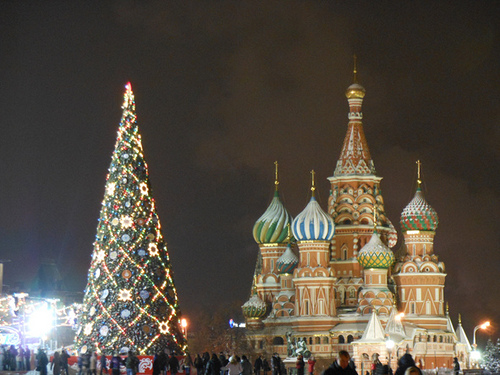 Following the Julian Calendar, the Russian Orthodox Church celebrates Christ’s birthday on January 7. Although this date is 13 days after the worldwide celebration of Christmas, Russians also honor it with bright lights and Christmas trees. The Christmas tree in Moscow’s Red Square looks even more stunning with Saint Basil’s Cathedral in the background.

The Christmas Tree in Paris, France 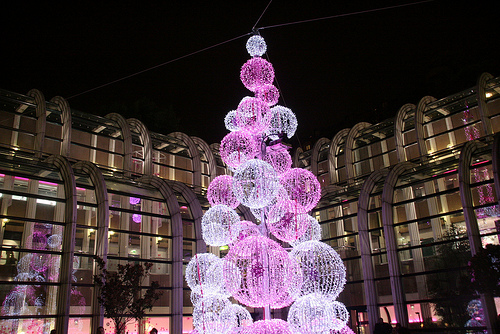 Staying true to its title as The City of Light, Paris features this gorgeous Christmas tree made of balls of pink and white holiday lights. Situated at the Forum des Halles shopping centre, this tree exudes elegance with its fine construction, while adding a lovely glow to the romantic European city. The various sizes of the illuminated spheres bring a modern twist to the traditional Christmas tree.

To attract and entertain customers, shopping malls in Hong Kong put up larger-than-life decorations, such as the giant Garfield display, Ferrero Rocher Christmas Tree, and Tiffany Christmas Tree. In 2012, a shopping complex called the 1881 Heritage put up an adorable giant teddy bear, which was placed beside an arch and a giant Christmas tree. These huge displays worked together to create an inviting atmosphere for families. The teddy bear became a destination in its own right, serving as a magnificent backdrop for tourists’ photographs.

The Window Displays in the Cartier Building in London, England

A classy take on outdoor decorating, the entire display in the Cartier building features a Christmas tree in each window. A huge ribbon is tied around the building to make it look like a giant Christmas present. The spectacle is a picture perfect way to brighten London’s historic Bond street. Each window display brings a lovely heartwarming glow in this season of gift giving.

May these breathtaking trees from around the world inspire you to make the most of your holiday decorating and help you recreate these landmark decorations right in your home.